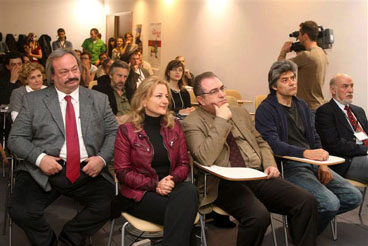 One hundred and twenty five writers from all over Europe gathered in Thessaloniki on the 21st and 22nd November and committed to campaign for the implementation of a manifesto, which defines the role of the screenwriter in the twenty-first century, agreed at the conclusion of the meeting.
Speaking at the opening Wim Wenders, Chairman of the European Film Academy (EFA) said that it was important to finally give the screenwriter his place.

The Conference, which took place in Thessaloniki, was attended by one hundred and twenty five writers from twenty two different European countries.

Taking place on the 21st and 22nd of November the conference discussed issues related to stories, rights and money.

The conference Chairperson writer Christina Kallas (also member of the Scriptwriter's Guild of Greece) said in her opening speech that:
'It is writers who face the blank sheet and conjure out of nothing the stories that captivate the world. Everything else – producers, directors and distributors – come later.
We are the primary creators of the audiovisual work.'

During the opening session Mogens Rukov the writer of Festen said ‘We make the story. Authors should be proud’.

Among the speakers was David Kipen, Director of Literature at the National Endowment for the Arts in the United States and author of ‘The Schreiber Theory’, which asserts that American film history can be better understood by concentrating on writers. He summed up the history of American cinema by saying that the first fifty years belonged to the producers, the second to the directors and the next will be for the writers. ‘We are historically at a kind of a crossroads’, he concluded, ‘and this is only the warning shot’.

A manifesto was agreed and those present committed to work towards the achievement of the goals set out in the document.

Stories are at the heart of humanity and are the repository of our diverse cultural heritage. They are told, retold and reinterpreted for new times by storytellers. Screenwriters are the storytellers of our time.

European writing talent should be trusted, encouraged and supported. The European film industries need to find ways to attract and keep its screenwriters in the cinema and in their craft.

1. The screenwriter is an author of the film, a primary creator of the audiovisual work.

2. The indiscriminate use of the possessory credit is unacceptable.

3. The moral rights of the screenwriter, especially the right to maintain the integrity of a work and to protect it from any distortion or misuse should be inalienable and should be fully honored in practice.

4. The screenwriter should receive fair payment for every form of exploitation of his work.

5. As author the screenwriter should be entitled to an involvement in the production process as well as in the promotion of the film and to be compensated for such work. As author he should be named in any publication accordingly, including festival catalogues, TV listing magazines and reviews.

6. National governments and funding agencies to support screenwriters by focusing more energy and resources, whether in form of subsidy, tax breaks or investment schemes, on the development stage of film and television production and by funding writers directly.

7. Scholars and film critics to acknowledge the role of screenwriters, and universities, academies and training programmes to educate the next generations in accordance to the collaborative art of the medium and with respect towards the art and craft of screenwriting.

8. Festivals, film museums and other institutions to name the screenwriters in their programs and plan and screen film tributes to screenwriters just as they do to directors, actors and countries.

9. National and European law should acknowledge that the writer is an author of the film.

10. National and European law should ensure that screenwriters can organise, negotiate and contract collectively, in order to encourage and maintain the distinct cultural identities of each country and to seek means to facilitate the free movement of writers in and between all nations.

§ Distribute this manifesto to industry members and the press in our respective countries.

§ Campaign for the implementation of the agenda defined by this manifesto.

§ Seek the transition into national and European law of the legal changes demanded by this manifesto.


The President and the Board of the FSE, representing 21 guilds and 9.000 screenwriters all over Europe


The Participants of the Thessaloniki Conference on European Screenwriting 2006